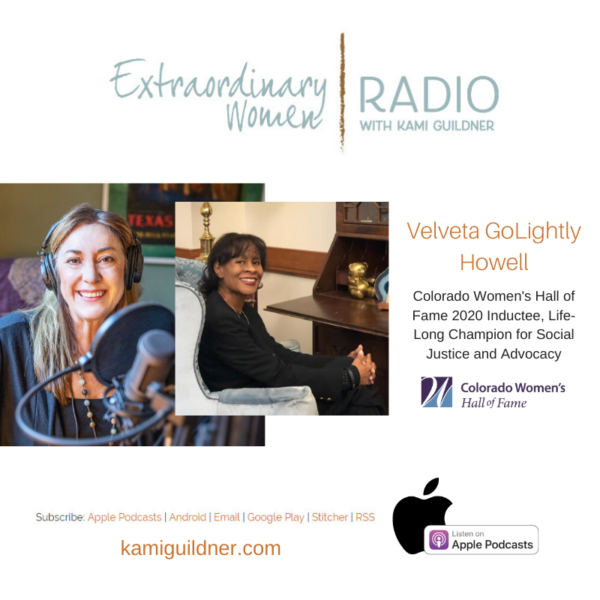 Velveta Howell has made many contributions as a life-long champion for social justice and advocacy. She is known as an exceptional role model for other African American women and girls. She was the eighth African American female graduate of the University of Colorado Law School and the first woman of color appointed as Colorado’s Deputy District Attorney. From her humble beginnings, she has worked tirelessly at the local, state, regional, and federal levels to advance the causes closest to her, succeeding in the fiercely competitive and often brutal world of criminal justice.

Through creative, solid, and sustainable policies, practices, and procedures, Howell designed roadmaps to enhance others’ lives, especially society’s most vulnerable. Her ability to visualize and eliminate impediments to social justice, equipped her to tear down barriers and increase access to social, civil, and criminal justice, quality and equal healthcare, clean water, affordable housing, food, and other critical services for people of all backgrounds.. Howell attributes her success to integrity, compassionfor all people, and an unrelenting commitment to justice. This determination has resulted in a succession of women, especially women of color, following her into this still male-dominated arena. Today, many African American prosecutors, judges, and defense attorneys in Colorado are inspired
and/or personally mentored by her.

Howell has worked to improve access to quality healthcare to all Colorado citizens, particularly under-served populations. She is one of twelve appointees to the Robert Wood Johnson-funded Colorado Healthcare Reform Executive Steering Committee and Turning Point Initiative . She is also the driver behind the committee’s focus on racial and ethnic healthcare disparities. This focus has resulted in the establishment and legislative enactment of the Colorado Office of Health Disparities , only the nation’s second.

“I had a purpose and God has plans that I would live out and that I would be strengthened and supported no matter the barriers.” – Velveta GoLightly Howell

Connect with Velveta Howell on LinkedIn.

Watch for five additional interviews in the coming months of the 2020 Inductee Hall of Famers:

Listen to other Colorado Women Hall of Fame inductee interviews from prior years.