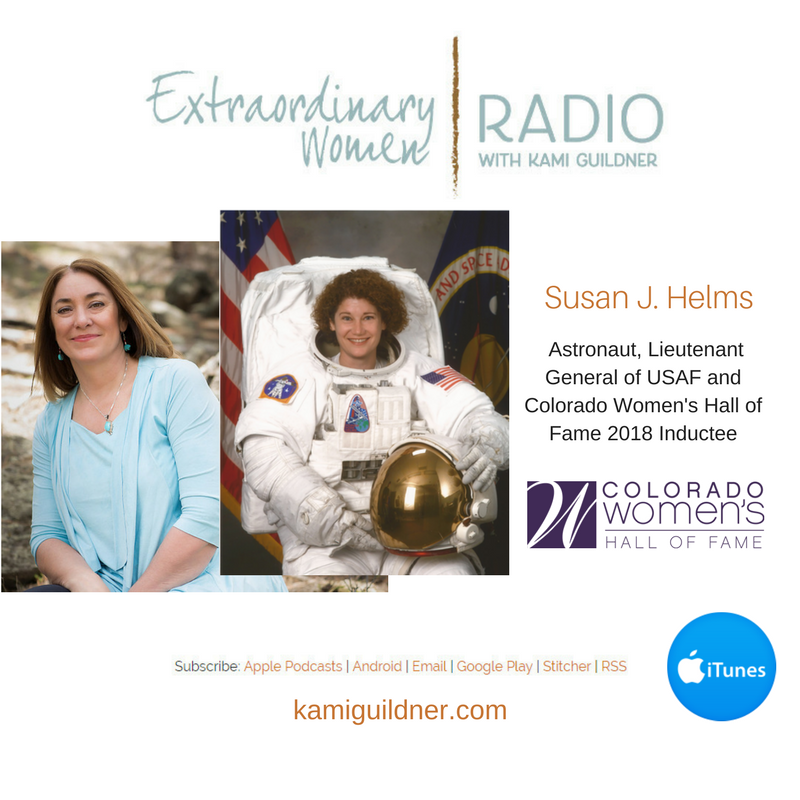 Today – I’m so excited to bring this very special Extraordinary Woman Radio interview with Astronaut Susan J. Helms – the first U.S. military woman in space! Susan is a retired Air Force lieutenant general and astronaut who was a crewmember on four space shuttle missions. She holds the world record for the longest space walk (8 hours and 56 minutes), and was the first woman to serve on the International Space Station.

Susan is part of my series featuring the Colorado Women’s Hall of Fame 2018 Inductees.

This is an interview full of stories of space travel and the lessons that accompanied it. Apparently, you can learn a lot about life when you spend nearly 5 months aboard a space station with only 3 others aboard the international space station. There’s lots of time to ponder the wonders of the world and the wonders of the Universe. We talk about humanity, life, following your dreams, working hard, training hard and being ready.

Here are a few of the golden nuggets from Susan:

Susan was a member of the first class at the Air Force Academy to include women. Lieutenant General Helms was commissioned from the US Air Force Academy in 1980, the first class to admit women into the ranks of the cadet corps. Upon graduation, she served as an F-15 and F-16 weapons separation engineer and a flight test engineer. Following completion of her Masters of Aeronautics and Astronautics at Stanford University, she served on the Faculty of the US Air Force Academy in the Department of Aeronautics. She was subsequently selected to attend the USAF Test Pilot School, Flight Test Engineer Course, Edwards AFB, CA, completing the year long school as a Distinguished Graduate. After graduation, she served as project officer on the CF-18 aircraft as a U.S. Air Force Exchange Officer to the Canadian Aerospace Engineering Test Establishment, at Cold Lake AFB, Alberta, Canada. As a flight test engineer, Lt Gen (R) Helms has flown in 30 types of U.S. and Canadian military aircraft.

Since retirement, General Helms has spent her time on Board work, consulting and speeches. General Helms is currently on the Board of Trustees for the Aerospace Corporation, and on the Board of Directors for Concho Resources, Inc. (CXO). She currently serves as a member of the NASA Aerospace Safety Advisory Panel, and in 2014, was appointed by President Obama to a two year term as a Trustee, Board of Trustees, Woodrow Wilson International Center, a bipartisan think tank in Washington DC. She is also a Board Member of the Association of Space Explorers, and has established her own consulting company, Orbital Visions, LLC, in Colorado Springs, CO.

Check out some of the other 2018 Inductee Hall of Famers:

Listen to other Colorado Women Hall of Fame inductee interviews from prior years.